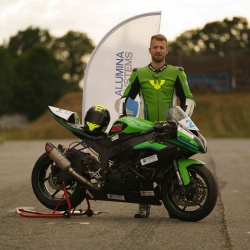 Our employees are everything - except ordinary. Jiri Klejch is an example of a very ambitious and sports enthusiast. The chief process mechanic won the motorcycle race on the Czech Most racetrack in July. With this preparation run for the Czech championships in the 600 cubic centimeter motorcycle class, he has put himself in an excellent starting position for the Czech Grand Prix. The motorcycle race for the Czech championship of the 600 cc class will take place in October. Jiri Klejch works in our Czech subsidiary in Hradec Králové. He started racing back in 2003 at the age of 10, first on minibikes and later in the Superstock 600 (600 cubic centimeter displacement) on long tracks. He has been Czech champion four times so far and took part in the European Championships between 2011 and 2013. After a 6 year hiatus, Jiri Klejch returned thanks to the support of Alumina Systems s.r.o. back to racing. He drives a Kawasaki Ninja zx6r, built in 2013, with 599 cc displacement and an output of 135 hp. .

A Brilliant Idea behind Every Product.